Globalization in the form of KIA Motors has brought a piece of Korea to a dry, rocky Andhra village

Globalization in the form of KIA Motors has brought a piece of Korea to a dry, rocky Andhra village

A dusty service road off the Hyderabad-Bengaluru-43 National Highway leads to the village of Rampur near Penukonda in Andhra Pradesh. A surprise awaits you beyond the village pond, just past the village temple – a small restaurant serving Korean cuisine. Taking off my shoes – which is culturally appropriate behavior – I walk in my socks into a room with two red-cushioned rugs and a sink. The daily menu includes modum sashimi (assorted seafood), yang jang pi (mixture of seafood, meat and vegetables), samgyeopsal (grilled pork belly), and beak ban. I’m happy to beak banwhich is a home-style meal, Google tells me.

How this slice of Korea came to be in a hot, dry, rocky village in Andhra Pradesh is a story of globalization and its ripple effect. “Before, it was an agricultural village. Once KIA Motors arrived, I was approached to rent out my land. It was a lot of money, so I agreed,” says Ammavaripalli’s Konda Reddy.

A restaurant with a few rooms, Haewadal Ace, has sprung up on the site rented by Reddy. In addition to serving Korean travelers and expatriates, the restaurant provides meals for Korean company workers that dot Penukonda, the headquarters of Anantapur district.

Penukonda was the capital of the rump kingdom of Vijayanagara after the Battle of Talikota in 1565. Shattered fort walls, a ruined palace and abandoned temples are all that remains of those glory days. Penukonda’s fate changed again in 2017 when Andhra Pradesh Chief Minister N. Chandrababu Naidu signed a memorandum of understanding with South Korean automaker KIA Motors to set up a facility in the Andhra Pradesh district. ‘Anantapur.

Once the 600 acres of land were identified near Penukonda, a dramatic transformation began. “A one-bedroom house with kitchen could be rented for ₹1,000 in Penukonda. This soared to ₹20,000 at the peak of civil works at the KIA site when hundreds of Korean workers lived and worked here. Now rents are down to ₹6,000,” says Rohil Kumar, who has business interests ranging from a hotel to a medical facility.

Gossip is commonplace in the village. As life returns to normal with people going about their chores without masks, Ahmed Khan expects good times. “They plan to launch a new car in two months. More people will come and business will boom,” says the manager of a property near the train station. “How did you learn about the launch of a new car? ” I ask him. “I have my sources,” he says, smiling. The property has signs in Korean and English about following COVID protocols.

Penukonda has four Korean restaurants, a Korean supermarket, and Korean language signage. Signs advertising Noah Guest House and Noah Sushi, offering “authentic Korean and Japanese cuisine,” dot the national road. The inner lanes also have Korean signs. Seoul Superstore, right on the expressway, is a one-stop shop for Korean staples like dried pollack, bonito flakes, sticky rice, dried seaweed; medicinal plants; crockery and cutlery; and, of course, the ubiquitous ramen. “We get 80% of our stock from Korea and that goes through Chennai. Koreans come to do their shopping in the evening while travelers stop there during the day. Spicy noodles are popular thanks to popular Korean dramas,” says Tamil, who runs the store with his father. The 20% equity from India is what the Koreans come to buy. 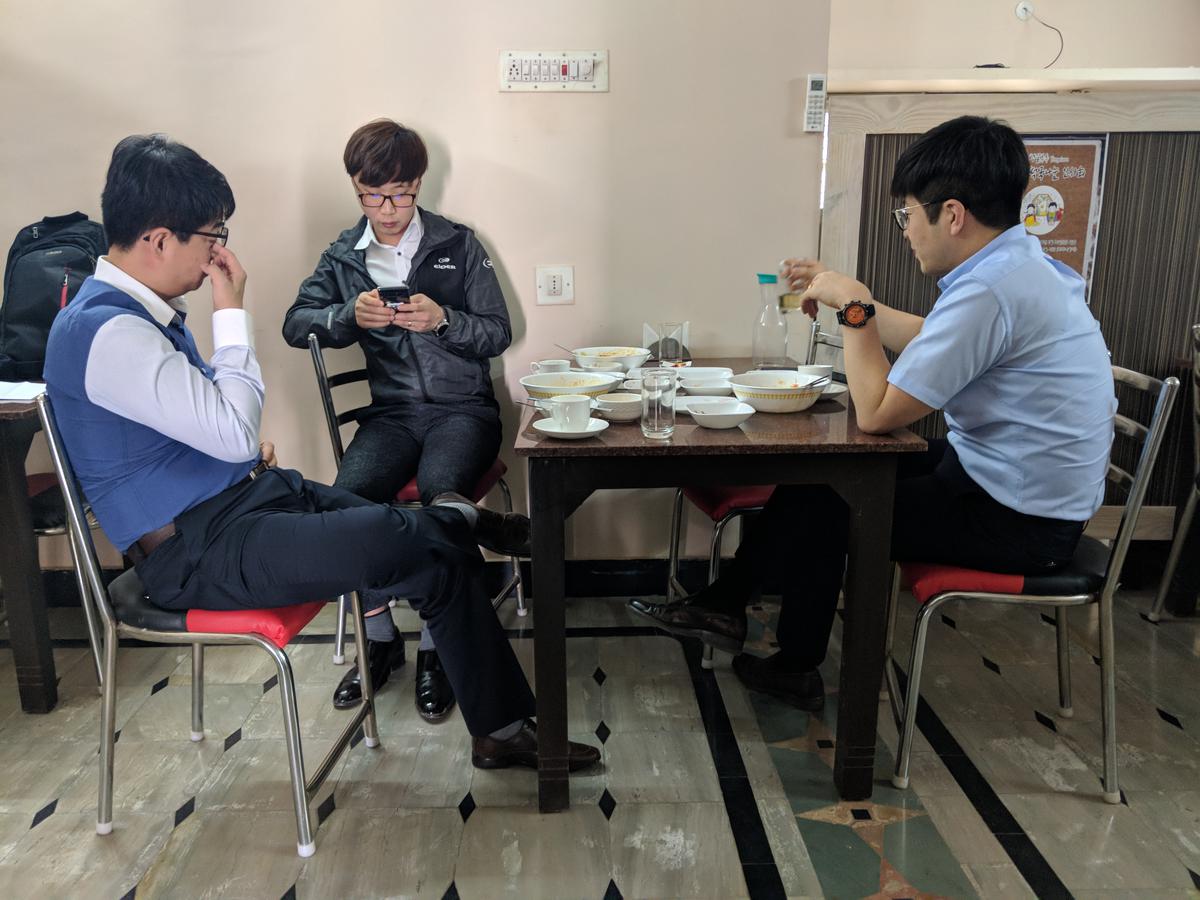 A family en route to Hyderabad stops for shopping. The excitement is palpable when they spot noodles, kimchi and assorted sauces, which they quickly add to their cart. Then they check prices and ingredients and slowly put the products back on the shelves. Although the spice quotient is high, most of the noodles are fish based and the prices are way higher than usual. The family ends up buying canned fruit juices and fizzy chocolates.

“I tried to learn Korean but without success. If I had mastered it, I would have struck money,” laughs Omer Farooq, a labor contractor in an auxiliary unit of KIA Motors. For two years when the factory was built, the number of Korean workers and managers increased. Today, the workforce of KIA’s main unit and other auxiliary units is predominantly Indian. But knowing Korean helps.

“Dealing with Koreans is not too difficult because HR people know a little English. Their English matches mine,” explains Maruthi Reddy, who left farming in his village of Bokkasampalle to become an entrepreneur at KIA Motors. “I supply household cleaning products, gas cylinders, agricultural equipment, raw materials for food. Hundreds of people like me from Anantapur, Dharmavaram, Roddam, Gorantla, Puttaparthi mandalas, have benefited from Korean companies by getting jobs,” says Reddy.

Every afternoon and evening, Mamata Singh oversees the cooking and provisioning of gargantuan quantities of South Indian food and biryani: her catering business supplies meals to four auxiliary units in and around Penukonda. “My husband and I have known Korean since we were in human resources management. When this opportunity arose, we moved here,” she says.

For Lee Haengwon, among the first to open a Korean restaurant in Penukonda, language is not a problem, but the pandemic is. He talks about the blow to business by following the general elections in Korea on the television set of the Shilra restaurant, where he works as a manager. “The last two years have been very bad for business as many have gone home. Things haven’t gotten much better,” Lee says. He spent 20 years in China before coming to India and is fluent in English. Shilra has a series of private rooms arranged around the lobby on the ground floor. Some rooms are equipped with a karaoke bar. “Food is a community feast. During the weekends, we used to hold small parties where guests could have their own celebrations with songs and music over the food we serve,” says restaurant owner Shin, Dong cheol. Guests remove their shoes and wear flip flops before being seated.

While the restaurant owners are Korean, the majority of workers and chefs come from northeast India and Nepal. “I learned to cook Korean food in five years. You have to understand the culture to cook its food. While our food is masala-based, Korean cuisine uses fermentation and sauces at controlled temperatures. If you eat cuttlefish, you will taste cuttlefish and not masala,” says Manoj from Nepal, who is now a chef at a Korean restaurant called Vidam.

While the influx of Koreans has transformed the lives of hundreds of villagers, quality infrastructure is still lacking. In the absence of public transport, Korean companies provide transport facilities to workers. Lack of infrastructure means Penukonda has not been able to attract other major automakers. Open sewers, the simian menace, poorly maintained roads and the absence of streetlights place the area firmly in another era despite the Korean luster.

“Dealing with Koreans is not very difficult because HR people know a little English. Their English matches my English,” laughs Maruthi Reddy who quit farming in his village of Bokkasampalle and is now an entrepreneur at KIA Motors. “I supply household cleaning products, gas cylinders, agricultural equipment, raw materials for food. Hundreds of people like me have found jobs. There will be hardly any villages in Anantapur, Dharmavaram, Roddam, Gorantla, Puttaparthi mandals where people have not benefited from Korean businesses,” Reddy explains. Every evening at 6 p.m., as workers prepare to leave for their shift, dozens of buses depart from Penukonda. Vehicles have Sungwoo, Daeha Haesung, Hyandai Mobis, Dongyang, Hwaesung written in English or Korean.

The village of Penukonda has the dargah of Baba Fakhruddin Suharwardy, who came from Sistan (eastern Iran) and settled here in the 13th century. Later, the Kakatiyas controlled the affairs of this region. Exactly 600 years later, a new deal has transformed Penukonda into a global village where elections in Korea are watched as avidly as cricket scores in India.