Yes, you read that right. Actor Pinoy, who spoke in the language of the Wahan tribe in the series “Arthdal ​​Chronicles”, is not only a talented comedian alongside Jang Dong-gun, Song Joong-ki, Kim Ji-won and Kim Ok-vin. Ang graduated from Korea National University of the Arts, where he pursued a master’s degree in cinema as part of a scholarship.

He has also worked on other dramas before, such as “The Beauty Inside” and “The Undateables”. The Korea National University of the Arts graduate, however, has more lofty goals beyond the screen.

As a director and producer of social documentaries, he won awards and joined film festivals with films like “Seoul Mates,” which starred none other than BYH48 member Ji Soo. “After this project he was recognized and is now considered an A-lister. I am happy that as a Filipino I contributed to its success in the Korean entertainment industry, ”Ang told Cosmo PH.

Ang in the middle of Typhoon Yolanda in Leyte during the shooting of “Paraiso” – documentary film. Source: Nash Ang

As an entrepreneur, he developed a mobile app to buy Filipino items in South Korea. As the developer of Pinoy Seoul, he is helping Pinoys in South Korea, with the long-term goal of connecting the two countries.

We caught up with Ang to find out more about his time at Korea National University of the Arts, K-drama adventures, and future plans:

When was your love for cinema born? Is there a personal story behind this?

From visual arts to performing arts, I have been multitasking in this field since my childhood. I made my first film “IskWater” (a documentary about the life of Filipinos who emigrated to Manila) and it got international recognition.

It made me realize that I am the most excellent filmmaker. From there, I focused on one direction because being jack-of-all-trades means master of nothing. 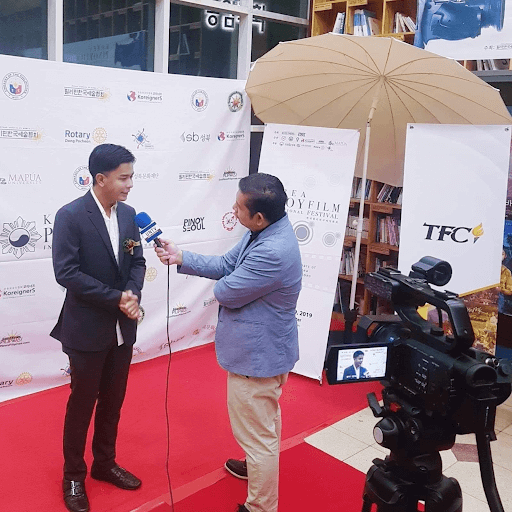 What prompted you to apply to study at Korea National University of the Arts?

When I made my first documentary short, I got a scholarship to finish it as a full feature film. It then became “Water Ghetto” (a film about informal Muslim settlers living on a canal behind the President’s official residence).

He was officially invited to compete at the DMZ International Film Festival in South Korea. I was encouraged by an acquaintance to apply for the AMA scholarship program offered by the Ministry of Culture of which the Korea National University of the Arts is a part. 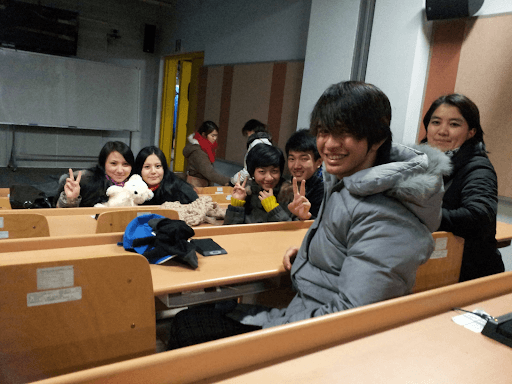 Ang pictured with his classmates at Korea National University of the Arts in 2012. Source: Nash Ang

After a few months, I was notified that I was accepted and I took the plane back.

Would it have made a difference if you had studied at a local institution?

South Korea has modern media facilities and also places great importance on education, which local institutions in my home country lack. Also, there is no program to get your Masters in Film in the Philippines. 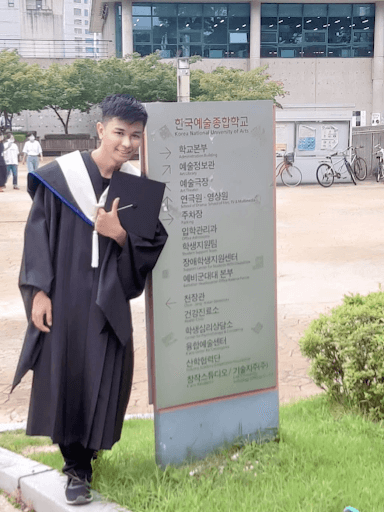 A virtual graduation ceremony during the pandemic for Ang’s Masters of Fine Arts and Film Director’s Major at Korea National University of the Arts. Source: Nash Ang

The result would be very different if I got a similar degree in the Philippines. I seized the opportunity without any hesitation.

What skills or knowledge would you like to have learned more during college?

Filipinos are known to be resourceful. Combined with the resources that can be found in South Korea, I think I have learned and experienced more than I can imagine. I couldn’t ask for more. 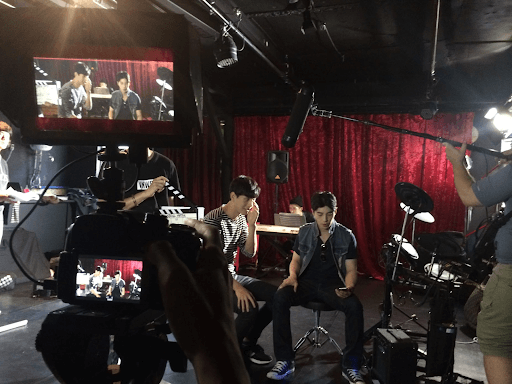 Shot on the first day of shooting for “Seoul Mates” in 2014. The very first Korea-Philippines feature film. Source: Nash Ang

With an impressive career as an actor, director and Pinoy Seol, what have you been up to since you graduated?

Since I graduated from Korea National University of the Arts, I have participated in many Korean dramas, films and productions. I founded Pinoy Seoul in 2017, a media portal that provides relevant information about South Korea to Filipinos around the world.

As a director, I won the grand prize of the ASEAN-Korea multimedia competition in 2010 which was held in South Korea for my first film. I also received the award for best director at the 13th Pyongyang International Film Festival in North Korea. 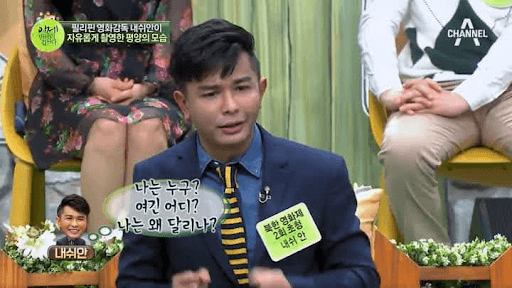 An interview on Channel A in South Korea where Ang talks about his visit to North Korea. Source: Nash Ang

Because of this persistence in maintaining Filipino artistic excellence in the international film scene, I am the 2011 and 2016 winner of the “Ani ng Dangal” (Culture and Arts Award) for Filipino Cinema.

Where does your passion for bridging the social inclusion gap between the Philippines and South Korea come from?

One of the reasons I stayed in Korea was the lack of strong Filipino representation in Korean entertainment and social entrepreneurship. I founded an online multimedia portal for Filipinos in Korea, created an online “sari-sari” (variety) store – Pinoy Store – and organized a film festival for these reasons.

We are all human beings living on the same planet. I believe no one deserves poorer life opportunities because of how they were born, where they came from, or what they believe (a very Miss Universe response!).

Are there any favorite moments as an actor and director that you can share with us?

My favorite project as an actor would be “Reset” this year, a masterpiece by Choi Jinyoung. This movie doesn’t use a single spoken word and has two main characters including me and another Korean actor. 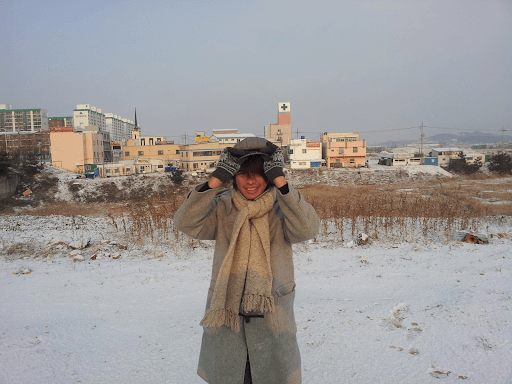 We communicate through visual wall art and a set of hand drawn images that make it so unique. I was chosen when the director messaged me via Instagram and we found out that we were actually neighbors in Itaewon.

When we first met the director discussed his concept and I immediately hooked on the unorthodox concept. This film is still in preparation and was recorded in the midst of a pandemic.

What advice would you give to international students who are considering enrolling in the same course as you?

With hard work and dedication, I think anything is possible. Just be optimistic. Setbacks don’t make us unhappy, our reactions to them do.

These failures can be a challenge for us to become better people. Not just as a budding filmmaker, but as human beings.

Where do you see yourself in 10 years?

I have just moved to San Francisco in the United States. This transition feels like a life reset as I lived in South Korea for a decade as an artist thirsty for new knowledge. These days I’m learning about entrepreneurship and business innovation at City College San Francisco.

If ever I have the chance to make a Korean film, I would like it to be well funded and without budget constraints. With the knowledge I’m currently learning here, I’ll be better prepared to do a bigger production and maybe be able to cast some famous celebrities. 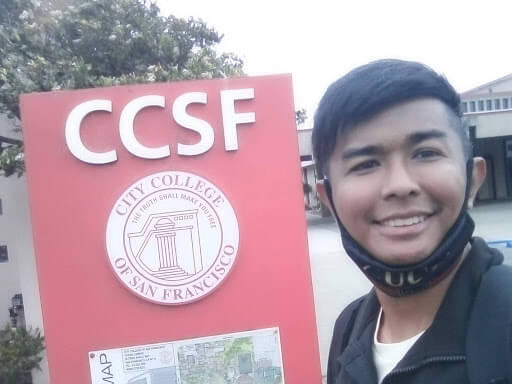 Then I would like to do a romantic comedy starring Korean celebrities popular in the Philippines such as Sandara Park. I would be crazy to say that I am a successful filmmaker.

I always wanted to be a student because being perfect means there is nothing more to learn. There is always something new that you can learn in life and these new things are the challenges that make us a better person.

Do you have any tips for students to budget wisely for their finances abroad?

My advice is to be resourceful! Being a student abroad is difficult because you don’t have a family to meet, just yourself. So use everything around you.

If you’re an introvert, practice socializing. Knowledge will help you expand the resources you can use. As you find ways to be comfortable, you will feel less homesick and settle where your new home is.